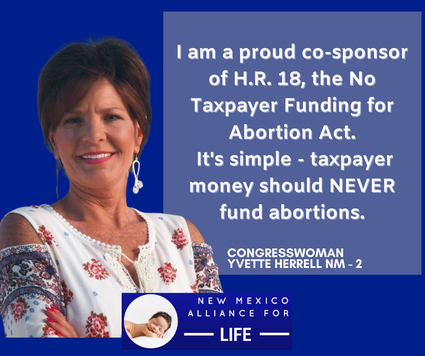 Last week, we reported the Biden Administration seeks to remove bi-partisan Hyde Amendment protections that have prohibited your tax dollars from federal abortion funding since 1976 - and saved millions of lives.

Thankfully, New Mexico's only pro-life congresswoman, Yvette Herrell has a history of defending life as a state representative in the New Mexico legislature-- in fact she was a a bill sponsor of NMAFL draft legislation, "The Late-Term Abortion Ban Act" during her tenure.

"Americans overwhelmingly oppose taxpayer funding of abortion, and the Biden Administration's effort to dismantle the Hyde Amendment is unconscionable. I am a proud co-sponsor of H.R. 18, the No Taxpayer Funding for Abortion Act. It's simple - taxpayer money should never fund abortions.

FACTS ON HYDE PROTECTIONS
Sadly, New Mexico is one of 17 states that forces its taxpayers to fund abortions through in-state Medicaid programs—including elective abortions throughout all 9 months of pregnancy. Here is also a list of facts you can find on Hyde protections, including polling information that shows a plurality of Americans oppose removing the Hyde Amendment.

Please consider partnering with us so we can continue our life-saving mission by making a secure, online donation today.

The nation's most radical anti-life bills have been introduced in the New Mexico 2021 Legislature: SB 10, an abortion up-to-birth bill (identical to HB 51 from 2019) and SB 47, an assisted suicide bill (links to both bills below).

SB 10 is scheduled to be heard at 1 PM on Monday, January 25th. Contact the members of the Senate Public Affairs Committee TODAY.
Tell them to vote NO on SB 10.
*Use some of the points below in your message.

The radical abortion lobby behind SB 10 seeks to strip New Mexico's 1969 criminal abortion statute and not replace it with ANY protections for women, babies and health care professionals. SB 10 will force the following:

1) Codify abortion up-to-birth in state law.
2) Remove the state’s only conscience protection, forcing medical professionals to perform/assist in abortions since there are no other explicit state or federal conscience protections preventing this.
3) Does not add any protections for women, but further empowers abortion businesses with less accountability.
5) Forces NM taxpayers to continue to fund healthy moms to abort a healthy baby up to 9 months of pregnancy through state Medicaid.
6) The majority of Americans and the majority of New Mexicans support a limit on abortion after 5 months.

SHARE THIS IMPORTANT INFORMATION WITH FRIENDS, FAMILY & GROUPS.
New Mexico Alliance for Life first reported the radical abortion lobby groups behind HB 51 and now SB 10 openly called for the removal of “religious refusals”—removing the option for medical professional or hospital to refuse to perform abortions.

The radical abortion lobby seeks to force medical professionals across New Mexico to perform abortions as a matter of "access." This is not a pro-woman bill but rather, a pro-abortion lobby bill.

The Elizabeth Whitfield End of Life Options Act, HB 47 would usher in assisted suicide in the state with the highest suicide rate already. It is also considered the most radical bill in the nation by the medical community. Bill analysis here.

“Assisted suicide endangers all New Mexicans, as we've witnessed overall suicide rates increase in states that legalize killing. Patients will feel pressured to opt out of life saving care by insurance companies as a cost-control measure" --Senator Dr. Gregg Schmedes, the ONLY practicing medical professional in the NM Legislature.

Support the life-saving work of New Mexico Alliance for Life today! We need your help to continue exposing the abortion industry in New Mexico, as our ground-breaking work delivers life-saving results and has been featured by national and local media!

﻿New Mexico Alliance for Life is a 501C-4 non-profit organization. Donations are not tax-deductible. Thank you for your support and for being a voice for those who don't have one!